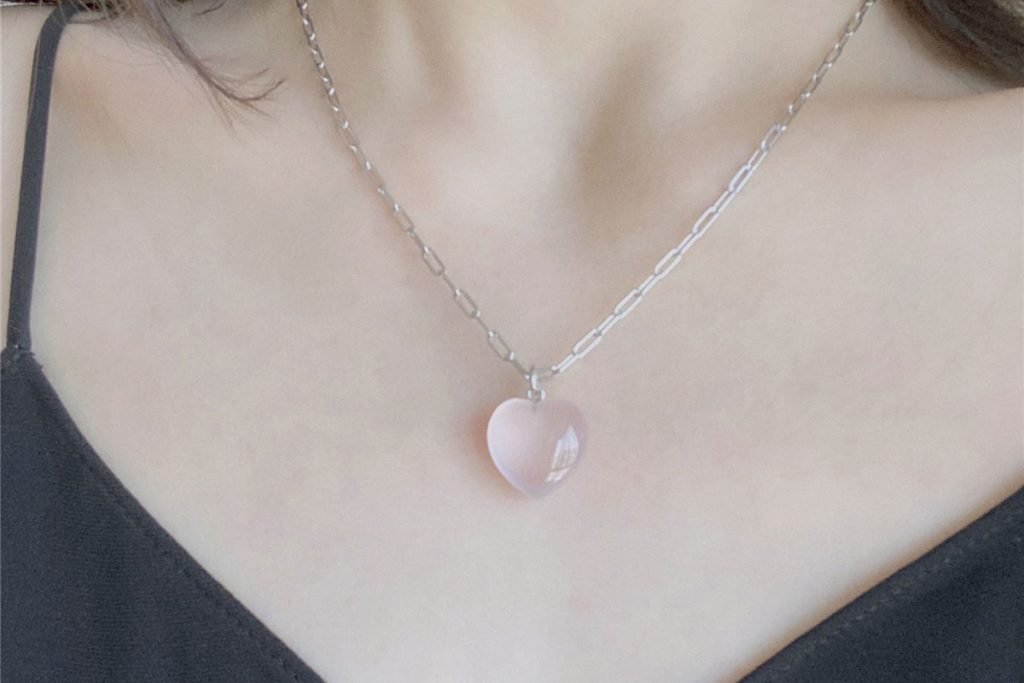 Rose Quartz Crystal Necklace brings you an abundance of healing energy and protection.

Healing necklaces are usually made of powerful natural crystals and are one of the most effective energy healing tools. Rose Quartz can amplify and accelerate the wearer’s body energy, assisting people in their physical and spiritual healing.

With its powerful healing properties, rose quartz is one of the best necklaces to choose for balance and strength in our daily lives.

Get our Rose Quartz Necklace – Free US Shipping + 70 Days Money Back Policy!

Wearing a necklace not only enhances your overall image, it can make you look more attractive, there are some purposes beyond that.

What Is Rose Quartz?

Rose quartz a mineral composed primarily of silica molecules, belonging to the quartz crystal family, usually found as self-hedra in hydrothermal veins and pegmatites at 752°F to 1,292°F (400°C to 700°C) .

Its color is a soft light pink, like a rose, so it is called rose quartz. Has pale pink and translucent transparency and vitreous luster, also known as pink quartz or clear quartz.

It has a hexagonal crystal system that, when polished to a convex or spherical shape, gives a very beautiful six-ray star in the light.

The origin is distributed in Madagascar, the United States, Australia, Brazil, South Africa, India, Sweden and Germany. The highest quality rose quartz is from Madagascar.

By 800-600 BC, it was widely part of Assyrian artefacts, and also affected the Romans, Greeks and Egyptians. They believed that rose quartz had magical powers, and it was often crafted into a powerful talisman.

The Romans used rose quartz to make seals to show ownership. The Egyptians believed that rose quartz could slow down aging, and it was used as an anti-aging ingredient in face masks and cosmetics. In Egyptian tomb excavations, rose quartz masks have been discovered.

It is also highly regarded in Eastern culture. It has been regarded as a beautiful stone since ancient times, a token of love, and has long occupied an important position in Chinese carving stones.

Australian wizards often use this stone to make powerful holy water, which is used as a powerful elixir.

What are the benefits of wearing a rose quartz necklace?

It communicates with our heart chakra and radiates the energy of love that heals emotional wounds. Helps the wearer to dispel the inner sadness and fear, and allows those who own rose quartz to return to a new space of pure love and balance.

Rose quartz vibrates and harmonizes with the goddess energy, assists in learning self-soothing, heals the self, and helps elevate women into the space of the goddess.

In many parts of the world, it is called the heart stone, and when rose quartz is placed close to the heart, it stimulates the normal functioning of the heart and circulatory system. Helps prevent blood clots and heart attacks.

How to care for a rose quartz necklace?

Moonlight can recharge rose quartz very well. Crystal and moonlight are both mothers of nature. On the night when the moon is strong, place rose quartz by the window or outdoors, and it will slowly absorb the feminine energy from moonlight.

Rose quartz needs to be cleaned regularly because it absorbs negative energy and we need to get rid of the negative energy. Place near clear quartz, or apply rose quartz with sage, or rinse with clear spring water.